Joseph "Joey the Clown" Lombardo, 77, reputed boss of the Chicago Outfit, is reportedly hoping that documents in the possession of the Chicago Crime Commission will help his defense in a racketeering trial, according to a story by Steve Warmbir of the Chicago Sun-Times.
Lombardo's attorney Rick Halprin had a subpoena served relating to records that caused the commission to place Lombardo atop an Outfit hierarchy chart created in the 1980s. Haprin noted that the late William Roemer served as both an FBI agent and as a consultant for the crime commission in the assembly of the hierarchy chart. Haprin said he is particularly interested in research that might have been done by the FBI into the September 1974 murder of Daniel Seifert. Lombardo and two others were charged with that killing in 2005.
Lombardo and 13 other reputed leaders of Chicago's crime family have been charged in a racketeering case known as "Operation Family Secrets" that includes 18 killings and spans four decades.

Charges against the group were revealed in April 2005. Lombardo remained at large for nine months, as police sought him. He was finally apprehended in suburban Elmwood Park, Illinois, in mid-January 2006. When he was captured, Lombardo had long hair and a full gray beard.

U.S. District Court Judge Frederic Block rejected another defense motion to transfer the murder case of ex-FBI agent Lindley DeVecchio to federal court, according to a story by John Marzulli of the New York Daily News.

Judge Block noted that DeVecchio is being charged with murders and "nothing to do with his federal duties." Murder is a state-level offense. The Kings County (Brooklyn) District Attorney's Office will prosecute the case. A similar defense motion was denied in August 2006.

DeVecchio has been charged with providing FBI data to mob informant Gregory Scarpa, reputedly a key man in the Colombo Crime Family. Scarpa used DeVecchio's assistance to kill four underworld rivals. DeVecchio has denied any wrongdoing. He has received vocal support from a large number of former and current FBI agents.

The case has increased friction between the D.A. and federal agencies in Brooklyn. In September, the D.A.'s office said the U.S. Attorney's Office was withholding documents relating to a 1996 investigation of DeVecchio.

Ann Chiarovano was sentenced Monday to five months in prison for lying to federal agents about mob influence in a New York school bus drivers union, according to a story by Thomas Zambito of the New York Daily News.

Chiarovano, said to be the girlfriend of a Genovese Crime Family associate, pleaded guilty in August. When questioned by agents, she denied informing reputed Genovese capo Ciro Perrone about subpoenas received by Local 1181 of the Amalgamated Transit Union. Chiarovano worked as the local's pension fund director and continued at her post after the guilty plea. She faced the possibility of a 20-year sentence when initially charged in the case. 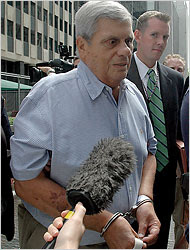 The bus driver's local was taken over by the international in November after federal indictments forced two top officers to step down. Local President Salvatore "Hotdogs" Battaglia, 60, was charged with obstruction of justice and racketeering. Prosecutors say he is an associate of the Genovese family. Local Secretary-Treasurer Julius "Spike" Bernstein pleaded guilty to racketeering charges and has been cooperating in the investigation.

Video reports from CBS-TV in New York look at three regional incidents of gang-related violence over the past few days:

In his first weeks on the job, Mexican President Felipe Calderon has tackled the issue of organized crime by sending thousands of federal police and military troops into the country's drug-dominated states of Michoacan and Baja California, according to a report by James C. McKinley Jr. of the New York Times.

The forces are attempting to combat rampant corruption in local police forces. They have disarmed police suspected of underworld involvement, burned marijuana crops and arrested those believed part of drug gangs. Four alleged top members of the Valencia drug gang have been taken into custody.

Critics point out that the move of federal forces into the region has done little to slow the gang-related violence there. An estimated 21 people were killed during the last three weeks of December, and a mass grave was found containing what appeared to be seven victims of gang hits.

A special target of Calderon's efforts is Tijuana. In that city, the entire police force was ordered to turn over its weapons, and more than 2,700 soldiers and federal police were called in. Three hundred people, including 25 police officers, were killed in Tijuana last year. Most of those deaths have been linked to drug gangs.

The family of Arellano Felix is still believed to control much of the drug traffic through Tijuana.
Posted by Thomas Hunt at 1/10/2007 05:19:00 AM No comments: