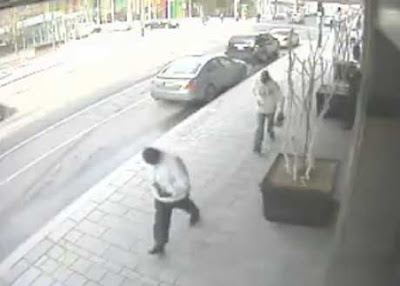 Montreal police posted surveillance videos on the Internet's YouTube service in the hope of identifying the gunmen who murdered two men and injured two others on March 18, according to a story by Catherine Solyom of the Montreal Gazette. Authorities believe 41-year-old Ducarme Joseph, owner of the Flawnego clothing store and alleged leader of a strong street gang, was the target of the attack. Joseph escaped out a back door of the store as the shooting began. His bodyguard Peter Christopoulos, 27, and store manager Jean Gaston, 60, were killed in the attack. Police believe the shooting may have been in retaliation for the December killing of Nicolo Rizzuto, son of jailed local Mafia boss Vito Rizzuto.
Posted by Thomas Hunt at 4/10/2010 04:01:00 PM No comments: