Funk played the jury clip after clip of Calabrese's secretly recorded conversations. "You can hear that man laughing, laughing about the murders," the prosecutor said at one point.

Calabrese (right) is charged with involvement in 13 mob murders. The prosecutor also outlined the evidence against the other defendants in the trial, Joseph "the Clown" Lombardo, James Marcello, Paul Schiro and former police officer Anthony Doyle.

Funk noted that, in order to believe the stories presented by defendants who took the stand, the jury would have to accept that several of them were unlucky enough to be caught by federal eavesdropping devices as they play-acted, according to a story by Rob Olmstead of the Chicago Daily Herald.

When Lombardo took the stand, he testified that he merely acted the part of a mob boss from time to time. He insisted he had no connection to the underworld.

The prosecutor urged jurors to stand up for the rule of law: "Who gives them the right to take the lives of other human beings? How is it that they can just walk into a business and demand money?"

Funk was scheduled to complete his closing remarks today. Closing arguments are expected to continue through Thursday.
Posted by Thomas Hunt at 8/28/2007 02:31:00 PM No comments:

No prison for Tocchet

Rick Tocchet, former Philadelphia Flyers hockey player, was sentenced to two years probation for involvement in a sports betting ring, according to an AP story published in the New York Daily News. Tocchet faced a maximum possible term of five years in prison. Tocchet reached a plea deal with prosecutors. He was charged with participating in a gambling ring with New Jersey State Trooper James Harney and with James Ulmer of Swedesboro, NJ. The ring dealt with bets totaling millions of dollars. Harney, no longer with the police force, was recently sentenced to five years in prison. Ullmer was sentenced last week to two years probation, according to Sports Illustrated.
Posted by Thomas Hunt at 8/28/2007 02:17:00 PM No comments: 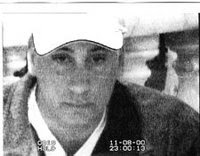 A letter-writer claiming to be one of the jurors in the recent trial of Vincent Basciano has asked for a new trial for the former Bonanno Crime Family boss, according to a story published in the New York Daily News.

The unidentified writer spoke of intense pangs of guilt after Basciano was convicted of racketeering murder after a 10-hour jury deliberation last month. "I needed to get this off my chest and to also let Vinny know that he had one juror that felt he was innocent of the murder charge," the letter said.

Defense attorney James Kousouros asked U.S. District Judge Nicholas Garaufis for a conference on the letter, indicating he was "disturbed at the tone and substance..."