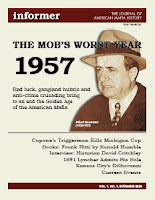 Contents of Issue #1:
For more information on this new electronic periodical, visit the web page:
http://mafiainformer.blogspot.com/
Posted by Thomas Hunt at 9/11/2008 02:37:00 PM No comments:

U.S. immigration agents today turned reputed Sicilian Mafia big shot Giuseppe Baldinucci, 65, over to police officials in Rome, Italy, according to a report by the Italian AGI news service. Baldinucci had been a fugitive from Italian justice for 11 years.

Believed to be a leading member of the Vitale Family of Partinico, in the Palermo region of Sicily, Baldinucci will serve an eight-year solitary prison sentence for the crime of Mafia association. Baldinucci helped to hide Giovanni Brusca from authorities back in 1996. He became an intermediary between the U.S. and Sicilian Mafias during the "Pizza Connection" operation, according to AGI.
Posted by Thomas Hunt at 9/11/2008 02:28:00 PM No comments: