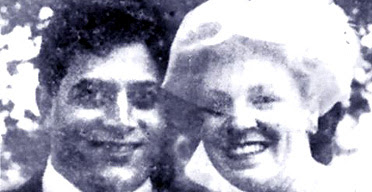 Ann Hathaway reached a deal with Italian prosecutors that allowed for her return to Britain last night, according to a story published by the UK Guardian Unlimited.

Hathaway, 44-year-old mother of two and the wife of jailed Sicilian Mafioso Antonio Rinzivillo (the couple appear in the photo above), admitted to Mafia associations and was given a suspended sentence by an Italian court. She was released and returned home to the Middleton area.

Italian prosecutors had arranged for her extradition from the UK by arguing that she managed her husband's underworld empire in his absence. Hathaway has denied the charge.

Albanian police seized a total of 489 kilos in two recent anti-trafficking operations, according to a story published by the Balkan Investigative Reporting Network.

The larger of the two operations resulted in the discovery of 428 kilos in a van traveling from Kosovo to the Albanian capital of Tirana. The heroin was hidden in grocery bags.

Albania is reportedly a conduit for Afghan heroin on its way into western Europe.
Posted by Thomas Hunt at 5/08/2007 01:30:00 PM No comments:

The Calabrian secret society known as 'ndrangheta has risen to control the cocaine trade based in Milan as well as a number of legitimate businesses in northern Italy, according to a UPI story published in the Washington Times.

'Ndrangheta is traditionally a rural gang network in southern Italy. But the story indicates that the network is becoming more involved in urban drug trafficking and violent crime.

During last week's arrest of 20 suspected Calabrian mobsters, including reputed boss Salvatore Morabito, 550 pounds of cocaine were seized.
Posted by Thomas Hunt at 5/08/2007 01:25:00 PM No comments:

Two women were called to the witness stand in New York Monday to poke holes in the federal case against Dominick "Skinny Dom" Pizzonia and Alfred "Freddy Hot" DiConiglio, according to a story by John Marzuli of the New York Daily News.

The two men are accused of the 1998 racketeering murder of Frank "Geeky" Boccia. Pizzonia (to the left of the photo) is individually charged with the slaying of Thomas and Rosemarie Uva on Dec. 24, 1992.

The 78-year-old mother of Pizzonia's mistress testified that Pizzonia could not have committed the Uva killings because he was at her home in Howard Beach helping to prepare the Christmas Eve dinner.

Francine Boccia said prosecutors "overexaggerated" the fight between her mother and her husband in order to create a motive for Boccia's murder. Prosecutors contend that Frank Boccia struck his mother-in-law, the wife of reputed Gambino Crime Family mobster Anthony "Fat Andy" Ruggiano Sr. and was subsequently killed for that offense.

Last week, the Daily News reported details relating to the disposal of Boccia's corpse in the Atlantic Ocean. Thomas "Tommy Flash" Morea described the transportation and gutting of the remains before they were dropped into the water.