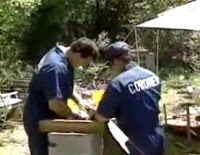 Construction workers on March 20 discovered a corpse in an area west of Chicago that had been known as a mob burial ground, according to a report by Mike Parker of CBS-2 Chicago.
Authorities dug up the area in 1988, acting on a tip. They found the bodies of two lower-level Chicago Outfit soldiers - Robert Hatridge and Michael Oliver - buried there. The find this week appears to indicate that the underworld has returned to its old ways. The corpse could have been placed at the site as recently as five years ago.
The DuPage County coroner is working to determine the victim's identity and cause of death.
Construction workers were digging to install a sewer for a townhouse project along Bluff Road near Route 83.
Posted by Thomas Hunt at 3/23/2007 08:26:00 PM No comments:

Richard Caccavale, 48, of Stormville NY, pleaded guilty in New Haven CT federal court March 21 to a single count of conspiring to violate the RICO Act through a property rights racket in the waste hauling industry, according to a press release from the U.S. Attorney for the District of Connecticut.

Caccavale was operations manager for Connecticut-based Automated Waste Disposal (AWD) and affiliated companies. Federal investigators intercepted telephone calls in which Caccavale reportedly attempted to intimidate trash carters into joining the monopolistic property rights scheme. In his guilty plea, Caccavale acknowledged that a trash hauler's truck was damaged because it would not go along with the rules of the racket.

Caccavale was one of a number of individuals and businesses indicted in connection with the property rights scheme last June. Prosecutors charge that the businesses agreed on service territories and made regular payments to New York-based organized crime.

Hathaway agrees to return to Italy

A British court decided today that Ann Hathaway (above), 44, will return to Italy within the next 10 days, according to a story in the Manchester Evening News. Facing Mafia-related charges in Italy, Hathaway reportedly agreed to the extradition.
The Italian government insists that the wife of jailed Sicilian Mafia boss Antonio Rinzivillo helped to administer the Rinzivillo empire in his absence. After Rinzivillo's conviction, Hathaway returned to her hometown in the Manchester area, where she lived with her two children. The Italian government requested her extradition, and Hathaway was arrested at her home on Jan. 18.
She faces a possible sentence of 24 years in prison if convicted of all charges against her.
Related MobNews posts:
Download the March 2007 issue of
MobNews Digest
Posted by Thomas Hunt at 3/23/2007 07:20:00 PM No comments:

A thousand police officers swept through Naples, Italy, neighborhoods before dawn on March 20 and arrested nearly 200 suspected drug criminals, according to a report by BBC News.

Police said they were targeting two clans of the local Camorra underworld organization. Entire families, including women and children, were taken into custody and charged with drug dealing or drug trafficking.