Interstate Industrial, a company with alleged ties to the Gambino Crime Family, is performing excavation and foundation work for the new Yankee Stadium, according to a story from WNBC in New York. 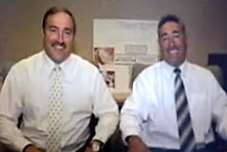 The company, owned by brothers Frank and Peter DiTommaso (left), has been ruled illegible to work on public projects in New York and in Atlantic City, NJ. The DiTommaso's have been indicted for perjury in connection with statements given during the investigation of former New York Police Commissioner Bernard Kerik. Last summer, Kerik admitted to illegally accepting $165,000 worth of renovations to his apartment from Interstate.

The New York Yankees is a private company and is not prevented from doing business with Interstate. While the ballclub is receiving $250 million in taxpayer funds for its news stadium, much of the remaining $1 billion price tag is coming directly from the team. Public funds are reportedly not being used for the excavation and foundation work.


The DiTommasos have not been charged with any mob-related offense, and the brothers insist they are free of any underworld connections and innocent of any wrongdoing. Officials in New York and New Jersey have investigated Interstate for years.

The company has been named in the court testimony of former Gambino capo Michael "Mikey Scars" DiLeonardo as a cash contributor to the crime family. A brother-in-law of former Gambino bigshot Salvatore "Sammy Bull" Gravano previously owned a branch of the Interstate business - a transfer station in Rossville. The New York City Business Integrity Commission found in 2005 that the purchase of that transfer station was an effort to free Gambino members from government scrutiny while preserving underworld control there.