The Family Secrets trial jury, now considering whether four defendants were responsible for 18 Chicago mob murders described in the case, will not deliberate again until Thursday, Sept. 20, according to a story in the Chicago Tribune.

Marcello, Lombardo, Calabrese and Schiro could be sentenced to life imprisonment if found guilty of the racketeering murders.

Anthony Doyle
Guilty of racketeering conspiracy. Doyle is not facing charges in connection with the racketeering murders. 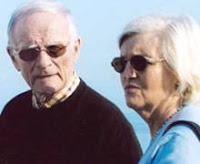 The FBI has released photographs and video that it says could be fugitive mobster James "Whitey" Bulger and his girlfriend Catherine Greig, according to a story by Helen Kennedy of the New York Daily News.
The images, taken in the area of Taormina, Sicily, were obtained through a U.S. drug enforcement agent who happened to be vacationing there in April and spotted the couple. The FBI is hoping others might be able to help identify the couple. A $1 million reward is offered for information leading to Bulger's capture.
Bulger led the Winter Hill Gang in Boston while aiding FBI investigations of local Italian mobsters. He has been charged with participating in 19 murders.

Today's issue of the New York Daily News includes a historical feature by David J. Krajicek on Syndicate hitman Abe "Kid Twist" Reles. Facing possible electrocution for a series of killings, Reles decided in 1940 to aide in the prosecution of his old associates. He was a key witness in the 1941 case against mob boss Louis "Lepke" Buchalter, and prosecutors expected Reles to help send Albert Anastasia to the chair. But, on Nov. 11, 1941, Reles fell to his death from a window in the Half Moon Hotel, where he was under police guard. A couple of tied-together bedsheets were found out the window, and some suggested Reles was trying to escape. The great distance to the ground and the distance Reles landed away from the building were indications that he was helped out of the window. Reles became known as the canary who could sing but couldn't fly.
Posted by Thomas Hunt at 9/16/2007 08:16:00 AM No comments: