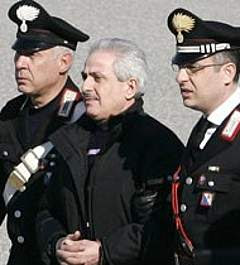 Italian police have nabbed the man they consider the "number one boss of the 'Ndrangheta" criminal society based in Reggio Calabria, according to a report by Gavin Jones of the Reuters news agency. Pasquale Condello, 57, was arrested Feb. 19. Authorities said his position in the underworld of the southern mainland of Italy was similar to that of Mafia boss of bosses Bernardo Provenzano of Sicily. Condello had been a fugitive from justice since a murder conviction in the late 1980s. Investigators believe his 'Ndrangheta organization controls cocaine trafficking through much of Europe.
Posted by Thomas Hunt at 2/24/2008 11:25:00 AM No comments:

Files and evidence recently pulled from a long locked safe at the Dallas County district attorney's office has triggered fresh debate over a conspiratorial relationship between Kennedy assassin Lee Harvey Oswald and Oswald's killer Jack Ruby, according to stories by Jennifer Emily of the Dallas Morning News and Anabelle Garay of the Associated Press. 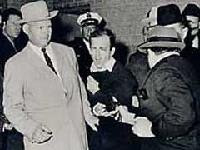 The files contain a document that presents itself as a transcript of a conversation between Oswald and Ruby on Oct. 4, 1963, weeks before President John F. Kennedy was shot to death in Dallas, Texas. According to the transcript, the two men discussed assassinating the President in order to bring a halt to the Mafia investigations of Attorney General Robert Kennedy, the President's brother. The transcript indicates that Ruby warned Lee not to get caught: "...the boys will make me follow you, wherever you go, and kill you."

Kennedy was shot Nov. 22, 1963, while riding with his wife and Texas Governor John Connally in a motorcade through Dealey Plaza. Oswald was arrested later that day. Ruby shot Oswald to death while Oswald was being moved by authorities on Nov. 24. Ruby won an appeal of a death sentence but reportedly fell victim to cancer while in custody.

Experts on the JFK assassination believe the transcript to be a fake, part of a package of information intended for a speculative motion picture that was never made. In the same safe was found a 1967 movie contract signed by former Dallas District Attorney Henry Wade.
Posted by Thomas Hunt at 2/24/2008 10:35:00 AM 1 comment: