Canada releases Gallo, may deport him 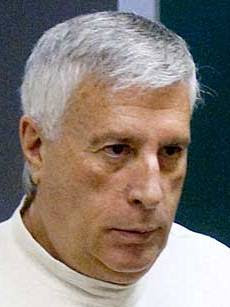 Canadian officials granted imprisoned Montreal racketeer Moreno Gallo (left), 64, release to a halfway house at the end of March, even while they warned him that he might soon be rearrested for deportation, according to a story by Paul Cherry of the Montreal Gazette.

Gallo, an Italian native, arrived in Canada with his family in 1954. He never became a citizen. He was convicted of the 1973 vendetta murder of 26-year-old drug dealer Angelo Facchino. He was paroled in 1983 on the condition that he have no association with underworld figures. Authorities learned that he made regular visits to the Cosenza Social Club on Jarry Street East, headquarters of the Rizzuto Mafia organization. Gallo was arrested in 2007 on evidence gathered in Operation Colisee. He was imprisoned for associating with mobsters.
Posted by Thomas Hunt at 3/30/2010 03:55:00 PM No comments:

A former boss of the Bonanno Crime Family would rather remain in solitary confinement in a Brooklyn detention facility than be sent to the supermax prison in Colorado. Vincent "Vinny Gorgeous" Basciano, already sentenced to life in prison for past convictions, will remain in custody as he awaits a spring 2011 death penalty trial. On March 25, he asked a Brooklyn federal judge to leave him in Brooklyn during the wait, according to a story by John Marzulli of the New York Daily News.

Basciano has been held under strict lockdown conditions in Brooklyn for the past 44 months. He was placed in solitary when evidence surfaced of an apparent Basciano plot against government witnesses, a prosecutor and a judge. In Brooklyn, he receives regular visits from his ex-wife.
Posted by Thomas Hunt at 3/26/2010 03:52:00 PM No comments:

A conviction for loansharking and gambling has increased the prison sentence of a jailed former Genovese Crime Family boss by 18 months, according to a story by Bruce Golding of the New York Post. Daniel "the Lion" Leo, 69, is 34 months into a five-year prison sentence. Manhattan federal Judge Richard Holwell decided March 24 that the more recent loansharking and gambling charges should have been part of the original 2007 case against Leo. The judge sentenced Leo to 70 months for the additional charges but decided that Leo should be credited for the 34 months served and that half of the remaining time be served concurrently with the original five-year sentence.
Posted by Thomas Hunt at 3/25/2010 03:50:00 PM No comments:

Federal agents executed a search warrant March 23 at the home of convicted Chicago mobster Frank Calabrese Sr. (left) and came away with a sensational haul, according to a story by Craig Wall of Fox Chicago News.

Behind a family portrait in the basement of Calabrese's Oak Brook home, agents found a compartment in the wall paneling. Inside they reportedly discovered seven loaded handguns, 15 manila envelopes containing a total of $728,481 in cash, about 1,000 items of jewelry, recording devices and casette tapes. The items and cash were seized by the government. As part of his Family Secrets Case sentence, Calabrese owes the government $20 million and owes the families of his victims $4.4 million. Calabrese was convicted of racketeering and of participation in 13 gangland murders.

Records of the Chicago Crime Commission indicate that Calabrese was involved in criminal activities since he was a teenager. A former mob loan shark who demanded interest as high as 520% a year, he was convicted in 1954 in federal court for possession of stolen cars in interstate commerce. He has arrests for robbery, stolen autos and illegal use of firearms. His loan sharking ring operated from 1970 to 1990s. Calabrese headed the 26th Street Crew of the regional underworld Outfit. The crew oversaw gambling and loan sharking in the Chicago area.
Posted by Thomas Hunt at 3/25/2010 03:45:00 PM No comments:

Vincent "Vinny Gorgeous" Basciano's efforts to have capital charges against him thrown out have failed. An request filed with the Second Circuit Court of Appeals was denied on March 22, according to a story by Janon Fisher of the New York Post. Basciano had hoped to convince the appeals court that his earlier conviction as boss of the Bonanno Crime Family included the three racketeering offenses with which he is now charged. The court ruled that only one of the offenses could be thrown out. The other two, including a capital murder conspiracy charge for the Nov. 30, 2004, killing of Ralph "Randy" Pizzolo in Williamsburg, Brooklyn, were left in place. A death penalty case against Basciano is scheduled to begin in 2011.
Posted by Thomas Hunt at 3/25/2010 03:42:00 PM No comments:

Two men were shot dead in Old Montreal on March 18, causing police to scramble to find links to Canada's most prominent Mafia family, according to a story by Andy Blatchford and Sidhartha Banerjee of the Toronto Star. Police did not immediately identify the two victims, who were shot at a high-end St. Jacques Street clothing store. Two bystanders were struck and injured by flying lead. The gunmen escaped the area on foot. They were seen discarding clothing and Rastafarian-style wigs as they walked briskly away.

Detectives had been expecting reprisals for the Dec. 28 slaying of Nicolo Rizzuto, son of jailed Montreal crime boss Vito Rizzuto. Vito Rizzuto is serving a 10-year sentence in Colorado for his involvement in three Brooklyn, NY, racketeering murders in 1981.

The March 18 killings were later linked to Ducarme Joseph, owner of the clothing store, according to a story by the AFP news service. Police speculated that Joseph, reportedly tied to Montreal street gangs, was the target of the attack. A Joseph bodyguard was one of the victims. Canadian organized crime expert Antonio Nicaso said the Rizzuto Mafia was seeing increased competition from Calabrian criminal organizations as well as street gangs. The competition, he suggested, may be receiving encouragement from New York Mafia groups.
Posted by Thomas Hunt at 3/20/2010 03:40:00 PM No comments: