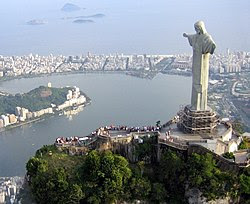 A recent story by Jens Glusing of Spiegel Online International explores the violence of this year's Carnival season in Rio de Janeiro, Brazil.
According to the story, dozens of mutilated corpses have been discovered within stolen cars. The victims had been tortured, possibly due to a violent rivalry between competing drug gangs. Those gangs have also engaged in recent firefights in city streets.
The violence reportedly did not disturb Rio's enormous pre-Ash Wednesday parades and other celebrations.
Governor Sergio Cabral said he will consult with Colombia, which has had success battling gang violence in Bogota and Medellin, on methods for resolving the problem.
Brazil's Finance Minister, Guido Mantega, was briefly taken hostage when hooded gunmen broke into the home of businessman Victor Garcia Sandri during a Carnival barbecue on Tuesday, according to an Associated Press story. About 10 guests were with Sandri at the time. The gunmen threatened a "bloodbath" if the guests did not give them money. Authorities say the assailants did not recognize Mantega.
Sao Paulo is also experiencing violence. FoxNews reported that two teenage couples were killed by unidentified gunmen at a plaza in the city's eastern section yesterday. Three of the teens were killed immediately. The fourth died at a local hospital. They were sitting at the plaza having a conversation when gunmen opened fire from an automobile.
Posted by Thomas Hunt at 2/25/2007 05:36:00 PM No comments:

Four police officers from Hollywood, FL, face life prison sentences as the result of a federal sting operation, according to a story by Brian Haas and Vanessa Blum of the South Florida Sun-Sentinel.

Federal authorities revealed the details of "Operation Tarnished Badge" on Friday. They say the four officers protected and transported diamonds, artwork, bonds and heroin for what they believed was a New York-based crime family. The crime family was actually an undercover operation by federal agents.

Detective Kevin Companion, 41, is charged with being the ringleader of the group. After meeting with the undercover agents in December 2004, he allegedly recruited Sgt. Jeffry Courtney, 51, Officer Stephen Harrison, 46, and Detective Thomas Simcox, 50, to aid him in a criminal enterprise. All the officers have been charged with extortion through the misuse of their public positions and conspiracy and attempted possession of a controlled substance with intent to distribute.

Simcox remained at large of Friday (he is expected to turn himself in to authorities tomorrow), as the other three officers were brought before U.S. Magistrate Lurana Snow. The magistrate set bond for Companion at $350,000, for Courtney at $375,000, and for Harrison at $300,000.

Three of the four officers were previously investigated by the police department, according to the Sun-Sentinel.
Posted by Thomas Hunt at 2/25/2007 05:21:00 PM No comments: