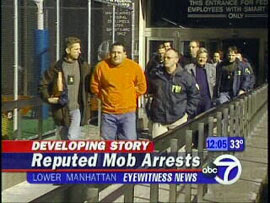 A two-year racketeering investigation resulted today in the arrests of 10 alleged members of the Gambino Crime Family and three alleged members of the Lucchese Crime Family, according to a broadcast report on WABC-TV in New York City.
George DeCicco, 77, an alleged captain in the Gambino family, was among those arrested and charged with participation in a criminal enterprise involving extortion, loan sharking, money laundering and bribery.
FBI spokesman Jim Margolin told reporters that a cooperating witness helped as the FBI accumulated hundreds of hours of taped evidence.
Posted by Thomas Hunt at 1/30/2007 07:07:00 PM No comments: 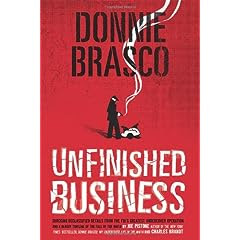 Donnie Brasco: Unfinished Business
Philadelphia: Running Press, 2007, $22.95.
Two decades after wowing us with Donnie Brasco-related revelations, former undercover FBI agent Joe Pistone returns to tie up some loose ends.
I must admit I was skeptical that Pistone could find enough loose ends in the Donnie Brasco story to fill another book. However, while there is some repetition, the ex-agent provides enough new information to keep us very interested. And, frankly, the repetitive parts are quite entertaining - Donnie Brasco's thrilling adventures are worth recalling.
The first portion of the book is basically a summary of the Donnie Brasco deep-undercover experience with many of the gaps filled in. Some details apparently had to be kept secret until court cases had been processed. Pistone also takes the opportunity to correct some impressions created by the movie based on his bestseller. He takes issue with some of the sentimental and self-critical Johnny Depp moments in the film:

"I never experienced any doubt, uncertainty, or reservation. I did not make Lefty [Ruggiero] a Mafia gangster... Lefty and his Mafia underground nation is America's enemy. I was an American FBI agent... In the end, I was proud to bring Lefty to justice, and I'm even more proud of the devastating short- and long-term effects on the Mafia that people have credited, in part, to my work."

Pistone recalls for us the criminal activities ("unauthorized by the Bureau") he engaged in while undercover as "Donnie," an associate of the Colombo and Bonanno Crime Families. His admitted crimes include a murder conspiracy, hijacking and a number of other offenses (he apparently beat two stick-up men to a pulp because they dared to rob money from connected guys). But Pistone admits he would have gone even further in order to protect himself.
Underworld associates like Brasco might be called upon by Mafia superiors to perform gang "hits." Pistone decided that, if confronted with a situation in which he had to kill an underworld character or face the certain wrath of the mob, "...the wiseguy would go. I knew the FBI would not stand behind me on something like that. Well, let me call it what it is - murder in the first degree."
The situation nearly came up in 1981, first in the murder of the Three Capos (when Bonanno bigshot Joseph Massino nixed Brasco's participation) and then as Brasco was assigned by Bonanno caporegime "Sonny Black" Napolitano to assassinate Bruno Indelicato. Indelicato went into hiding, and Pistone was pulled from his undercover assignment before the nightmare scenario had a chance to develop.
The rest of the book is devoted to Pistone's post-Brasco experiences as a courtroom witness against the Mafia. Working with prosecutors, like then-U.S. Attorney Rudy Giuliani of New York, he participated in some blockbuster trials, including the Bonanno Family case, the Pizza Connection, the Mafia Commission case, the conviction of Bonanno boss "Big Joey" Massino, and the Mafia Cops trial of 2006.
Pistone's description of the trials is anything but bland. He provides compelling and often gory detail, while recounting the defeats of the mob through the past 25 years.
Pistone has a different co-author for "Unfinished Business," former Delaware prosecutor Charles Brandt who wrote I Heard You Paint Houses. However, the writing style - using casual phrasing and rhythms that would be at home in city street corner conversations - remains uniquely Pistone.
This is an informative and entertaining book.
Posted by Thomas Hunt at 1/30/2007 12:25:00 PM No comments: