Emma Seifert believes that Joseph "Joey the Clown" Lombardo (left) was one of two masked gunmen who murdered her husband in 1974, according to stories by Jeff Coen of the Chicago Tribune and Steve Warmbir of the Chicago Sun-Times.

Testifying in the federal Family Secrets trial last week, Seifert described the killing of her husband Daniel on the morning of Sept. 27, 1974. Two masked men burst through the door of the office she shared with her husband. "I screamed, but obviously not loud enough," she said.

Daniel Seifert, a former friend of Lombardo's who was set to testify that Lombardo robbed funds from Teamster pensions, was struck, chased and shot to death. After being knocked to the ground, Seifert scrambled to his feet and ran from the office through a parking lot to his fiberglass factory. A bullet took him down. One of the gunmen approached and delivered another shot to his head.

After Seifert's death, the case against Lombardo fell apart.

Emma Seifert believed she recognized Lombardo by his build, his height and his stride. At the time of her husband's murder, she did not tell police of her suspicion that Lombardo was involved. 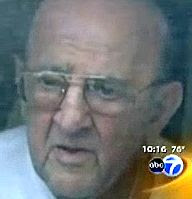 A news report by Chuck Goudie of ABC-affiliate WLS-TV in Chicago (click picture for the report) indicates that 84-year-old Alphonse "Al the Pizza Man" Tornabene could be the Outfit's consigliere. The Chicago Sun-Times recently speculated that Tornabene might be the current family boss.
The report hinges on the U.S. Attorney's Office proffer in the Family Secrets case. That document contains witness Nick Calabrese's recollections of his Mafia induction ceremony in 1983. Calabrese said two men presided over the ceremony. One of them was the late Joseph "Joey Doves" Aiuppa. The name of the other man was redacted in available copies of the proffer. However, WLS-TV got hold of an unredacted copy and found that Tornabene (right) was named as the second man to preside over the ceremony.
Tornabene, who has no criminal record, is a cousin of the late Sam "Wings" Carlisi, a former Outfit bigshot. Tornabene's late brother Frank was believed to be affiliated with the Outfit. He was convicted on voter fraud and prostitution-related charged.
Authorities are reportedly looking closely into the disappearance of Anthony Zizzo last August. Zizzo met frequently with Tornabene until his disappearance immediately after leaving his home for a meeting.
Related MobNews post:
Posted by Thomas Hunt at 7/01/2007 07:14:00 AM No comments:

Federal prosecutors took what they could get in a plea deal last month with former Genovese Crime Family bigshot Liborio "Barney" Bellomo, according to a story by Kati Cornell of the New York Post.

As a racketeering/murder case against Bellomo (right) fell apart, U.S. Attorneys arranged a plea deal on mail fraud. That means, rather than face the worst penalties the government can impose, Bellomo could be sentenced to as little as three and a half years in jail. He will serve no more than five years.

Judge Lewis Kaplan apparently suffered some disbelief at the deal. After all, the original racketeering indictment included the 1998 murder of Ralph Coppola. However, Assistant U.S. Attorney Miriam Rocah explained that the case against Bellomo fell apart shortly after the indictment. According to Rocah, witnesses were reluctant to testify against Bellomo and the prosecutors feared they would lose a jury trial.
Bellomo was arrested in February 2006 along with 31 other accused underworld associates in New York City.
Posted by Thomas Hunt at 7/01/2007 06:51:00 AM No comments: