Providence, R.I., anti-corruption Mayor David Cicilline (above) and his reputedly not-so-anti-corruption older brother John M. Cicilline are featured in a story by Ray Henry run in today's Boston Globe.
The story explains David Cicilline's uphill battle against public perception. His father Jack is a well-known defense lawyer, whose clients have included New England Mafia boss Raymond L.S. Patriarca, reputed boss Luigi Manocchio and a number of other accused mobsters. Brother John, in addition to piling up thousands of dollars in parking tickets, has been indicted in connection with a scheme to win two accused drug traffickers a light sentence.
According to prosecutors, John Cicilline and a now-disbarred attorney asked a couple facing drug charges for $100,000. For that amount, they offered to stage a drug deal that the couple could expose to federal authorities in exchange for a lighter sentence. John Cicilline and his alleged conspirator have pleaded not guilty to the charges.

David Cicilline, 46, became mayor of Providence in 2002. He is said to be the first openly gay mayor of a state capital. He took office after the brief administration of John J. Lombardi, which followed Mayor Vincent Albert "Buddy" Cianci's (left) 2002 conviction for criminal conspiracy. (Cianci's prison sentence expires in late July of this year, but some believe he will be released as soon as next month.)

Macedonia is learning how best to fight organized crime from Mafia experts from Italy, according to a story published by Serbianna.com.

The Republic of Macedonia is looking forward to possible entry into the European Union. Official action against organized crime is seen as a prerequisite.

Through a two-year project funded by the EU's Agency for Reconstruction, Italian experts will make suggestions for anti-crime legislation, recruit and train a small core of crimefighters and help to upgrade Macedonian crime data systems.
Posted by Thomas Hunt at 1/29/2007 07:34:00 PM No comments:

Colombo had 'hook' in state prosecutor

Christopher Colombo bragged in 2001 that he had "a hook in" former New York State Attorney General Dennis Vacco that shielded him from prosecution, according to stories by Kati Cornell of the New York Post and Thomas Zambito of the New York Daily News.

A surveillance audio tape of the boast was played last week in Manhattan federal court, where Colombo and his brother Anthony are on trial for gambling, loan-sharking and extortion.

Christopher Colombo was taped during a conversation with contractor John Sitterly. Sitterly, charged with robbing elderly clients of over a million dollars, reportedly wore a wire to a Jan. 19, 2001, meeting. Discussing then-Attorney General Eliot Spitzer's investigation of Sitterly, Colombo said, "Spitzer is the worst. Vacco was the best. He didn't care about anything. I had a hook in him."

Vacco (left), now with a lobbying firm, told the Post that he had never before heard of the surveillance tape or of Christopher Colombo. "The guy's full of baloney," Vacco said. "...If I ever met him, he never registered on my radar screen."

Christopher and Anthony Colombo are the sons of slain mob boss Joseph Colombo, after whom the Colombo Crime Family in New York was named. 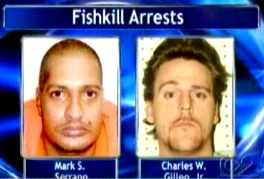 New York State Police say two men arrested over the weekend were responsible for killing an entire Fishkill NY family and setting the family home on fire to eliminate evidence, according to broadcast reports by WCBS-TV in New York. The homicides might have resulted from a drug dispute, say the police.

The remains of Manuel Morey, his wife Tina and their three sons, ages 6, 10 and 13, were found within their burned out home last week.

Prosecutors believe Morey was a partner in drug trafficking with Mark S. Sorrano, 29, and Charles W. Gilleo Jr., 31. The three are believed to have dealt in marijuana and cocaine, according to Dutchess County NY officials.

Sorrano and Gilleo have been charged with a single count of second degree murder. More charges could be filed soon. Sorrano turned himself in to police. Gilleo was arrested at his home in Hopewell Junction.