(While it appears he was at least 100 at the time of his death, Franzese's age has been inconsistently reported over the years. He was widely reported to be forty-seven when indicted in March 1966, placing his birth in 1918-1919. That birth timing was confirmed when he was arrested as a parole violator in spring 1986 at the stated age of 67. However, more recent reports have added a couple of years. The age of 103 noted in his obits puts his birth in 1916-1917.) 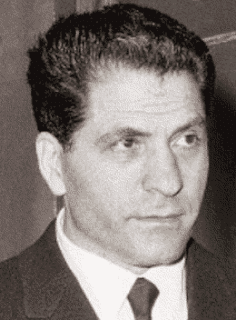 The Neapolitan Franzese reportedly began his underworld career as an enforcer and hit man. Franzese's power and influence were greatest in the 1960s, when as crime family lieutenant, he supervised Colombo rackets on Long Island and invested in "adult" night spots, Times Square peep shows and massage parlors, recording companies and pornographic movies.

Law enforcement began catching up with Franzese in the middle of that decade. He was indicted in March 1966 for acting as an enforcer for a lucrative Manhattan bookmaking ring, in the following month for leading a gang responsible for bank robberies across the U.S. and in October of the same year in connection with the 1964 murder of Ernest "the Hawk" Rupolo. Franzese once told Newsday that he felt the collection of charges in that period were due to a "conspiracy to get me."

Prosecutors got him only on the bank robbery conspiracy charge. For that federal offense, in April 1967 he was sentenced to up to fifty years in prison and fined $20,000. Franzese always insisted that he was innocent. He viewed the cases against him and the long prison sentence as government attempts to convince him to provide evidence against his underworld associates. He boasted of his commitment to the Mafia code of silence.

"They wanted me to roll all the time," Franzese recalled for an interview with Newsday. "I couldn't do that, because it's my principle. Jesus suffered; He didn't squeal on nobody."

Franzese remained free on $150,000 bail as his legal appeals in the bank robbery case were processed. (His attorneys argued that evidence against him had been obtained through the use of illegal electronic surveillance in the kitchen of his Roslyn home.) The appeals were unsuccessful, and he began serving his sentence on March 26, 1970, just three days before the Easter holiday. He was released on parole for the first time in 1978, but was sent back to prison on five different occasions for violating parole.

Franzese, then in his nineties, was convicted in 2010 of extorting New York businesses. He was sentenced to serve eight years in prison. He was last released from prison in June 2017.

In recent years, Franzese lived in a nursing home, needed a wheelchair to get around due to a broken hip and reportedly was fitted with a heart pacemaker and hearing aids.