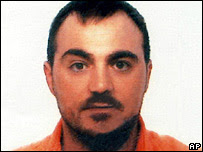 Extradition proceedings against reputed Italian underworld leader Gennaro Panzuto, 32, begin in a London magistrate's court today, according to a report by BBC News. Italy filed a warrant of extradition with the UK in order to prosecute Panzuto for alleged organized criminal offenses.
After a cooperative effort by Italian and UK police agencies, Panzuto (right) was arrested last week in Lancashire, UK, according to a report on the Manchester.com website.

He has been charged with association with a criminal network and firearms crimes. He is also reportedly suspected of involvement in four organized crime murders in Italy, of extortion and of establishing businesses in Manchester and London to launder underworld funds. An initial review of the extradition papers was held on May 17.

Vittorio Pisano, a law enforcement official from Naples, Italy, stated that Panzuto was the head of the Pincirillo underworld clan of southern Italy, taking over that group from his uncles upon their arrests two years ago. The Pincirillos have battled the Missos clan in Naples for months. Police attribute 20 killings to the feud.
Posted by Thomas Hunt at 5/24/2007 09:02:00 AM